Guys, it’s getting cold… Which means more baking to warm up the house. You guys do that too, right? I feel like the fall months are constant struggle between everything apple, or everything pumpkin spice. There may be other fall flavors, but in my mind these are the only two worth discussing. At least until we get closer to Christmas, then bring out the nog and gingerbread!

Where was I? Right! Apple vs Pumpkin Spice. Which do you prefer? Let me know if the comments below. Personally I love both, especially my PSL (pumpkin spice latte), and until someone comes up with an apple pie latte or something of the sort, I’m sticking to pumpkin.

So for this crisp, I opted for both. I’ll be honest, this recipe started as an experiment. Mostly because I couldn’t fathom using an entire cup of vegan butter in the crisp topping. Because 1-that’s a lot of fat, and 2-vegan butter isn’t cheap. Yes, I’m one of those… So I swapped out half the butter for pumpkin puree. Healthier, right? And since I had already added cinnamon to the mix, I thought why not a little ginger and nutmeg too. I know pumpkin spice usually includes cloves too, but cloves and I have a love-hate relationship. So I kept the spice list on the shorter side.

The results where a deliciously spiced crisp topping, with just the right amount of sweetness and richness. Atop slightly tart, soft apple wedges. You can thinly slice the apples, if you’ve time on your hands (and patience), or you can do like me a use and apple wedger. You know those inexpensive wedgers they sell in most department stores that remove the core and divide the apple into 10 wedges, works like a charm!

You can serve it warm or at room temperature, but warm topped with a ball of ice cream is really best in my opinion. That way the ice cream melts and add an extra sauce to the mix, mmmm, so good. Try it with the Toasted Cinnamon Ice Cream from the September newsletter! (If you’re not on our newsletter, you definitely should be. Subscribe at the top of the page and send me a note asking for the ice cream recipe) You’ll definitely want to save the leftovers for breakfast. And it’s low enough in sugar that is really does make a decent breakfast option, minus the ice cream. Although, that doesn’t sound like much fun. 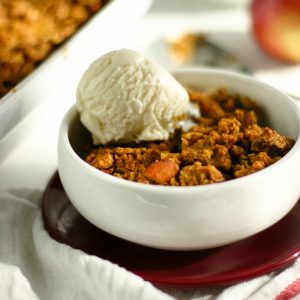