A quick and easy brownie recipe, and pretty versatile to be honest. Having invited my parents over for dinner a couple weeks ago, I was looking for something simple to serve for dessert. Cakes and cupcakes seemed too fussy for the mood I was in.

The meal was simple and I wanted to keep the dessert inline with that. Besides I had already planned on spending half my day at gym, so there really wouldn’t have been time to make a cake and frost it. Not when there was pizza dough to knead and pasta to roll out and dry…

You could make the salted caramel I used in the millionaire cake, but I chose to go for something simpler. A two ingredient date caramel. Ridiculously easy to make, and baked nicely into the brownies. I chose to dress them up with some sweet soy cream, a recipe from the Plum Bistro Cookbook, but you could also use coconut whipped cream, or even ice cream.The recipe makes 12 large brownies, a good size to be server as a dessert, or to throw into a lunch box for an afternoon snack. However, if you’re making these to share, you can easily cut them smaller and get 16-20 per pan. The recipe calls for coconut oil, which gives these brownies a firmer texture, especially once chilled. For softer fudge like brownies, swap the coconut oil for equal parts canola oil. 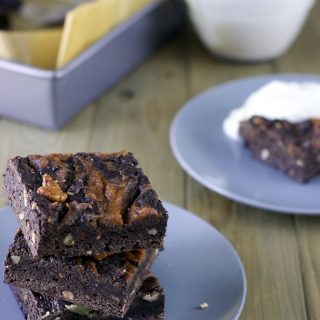