Banana bread is one of those basic recipes everyone should have in their arsenal. It should be considered part of the basics, right up there with boiling water and cooking rice. Ironically I couldn’t cook a pot of rice if life depended on it… thank god for the rice cooker… But back to banana bread! You may have notice I have quite the obsession with banana bread, considering the various recipes I’ve shared over the years… Double Chocolate Banana Bread, Marbled Chocolate Peanut Banana Bread, Coconut-Chocolate Chip Banana Bread…

We’ll here is a new one for you. Its actually the most basic, and traditional in terms of appearance and taste.

The first cookbook I ever received was from my Godmother. I remember I had been asking for a cookbook for a while (any cookbook, didn’t really care which one), but the thing is I was about 12 years old. And who wants to buy a 12 year old a cookbook for their birthday? I know it may sound like a dull gift, but its what I wanted more than anything, and that cookbook ignited a love for baking, and also a cookbook obsession… but more on that another day. The first thing I ever baked from that book was banana bread, the page is still dog eared (something I know longer do, some how its seems sacrilegious to dog ear books now). This recipe reminds me a lot of that first banana bread, its light and sweet, and studded with walnuts.

This has become my go-to recipe ever since transitioning to a gluten-free diet. On the plus side its also free from refined sugar… can banana bread earn bonus points? Because I think this one just did… 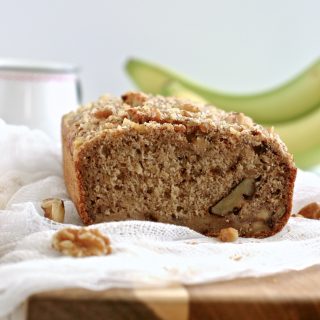 Save Print
Prep time
15 mins
Cook time
50 mins
Total time
1 hour 5 mins
Author: David James Di Pardo
Recipe type: Breakfast, Brunch, Snack, Bread
Cuisine: Vegan, Gluten-Free, Refined Sugar-Free
Serves: 1 loaf
Ingredients
Instructions
Notes
* Aquafaba is gaining popularity quickly for its ability to replace eggs in baking. If you haven't used it before, its the water strained from a can of chickpeas. Make sure to buy organic chickpeas with no added salt. If you want to avoid aquafaba, you can mix 2 tablespoons of ground flax seeds with ¼ cup of warm water, stir until thick.
** Both stevia and monk fruit bake up well in this banana bread. Coconut sugar is a perfectly fine substitute and tolerable for most people with sugar sensitivities, just keep in mind it isn't a zero calorie sweetener if that's something you are monitoring.
*** You can make your own oat flour at home. Just add rolled oats to a blender or food processor and process until fine.
Nutrition Information
Serving size: 1/10 loaf Calories: 262 Fat: 14 g Saturated fat: 8 g Trans fat: 0 g Carbohydrates: 31 g Sugar: 9 g Sodium: 132 mg Fiber: 3 g Protein: 5 g Cholesterol: 0 mg
3.5.3226