Hey there friends. Can you believe January is already over? Seriously, where did it go? I don’t know where you are in the world, but up here in Montreal it is cold as f… well I don’t want to cuss, so let’s just say its really cold. Like negative double digits cold, in both Celsius and Fahrenheit, doesn’t matter which way you slice it. Negative double digits in both. Which basically means there is only one thing on the menu right now. Soup. Every type. Everyday.

Now you guys know how much I love me some kitchen gadgets, but I have to say the one piece of kitchen equipment that has really stolen the show over the past year has been the Instant Pot. If your slow cooker was Bruce Banner, the Instant Pot would be the Hulk. All hyped up with extra features and cooking power. Also while it does has a slow cooker feature built in, its actually an electric (and programmable) pressure cooker. Meaning you can cook meals in less than half the time. And over the past couple months will all the writing I’ve been doing, that has been a major blessing. It means I can throw all the ingredients into the pot, select one of the pre-programmed cycles, and walk away. And in under 30 minutes, I have a delicious pot of soup and can sit down for a nice comforting meal.

Hence this minestrone soup. Completely vegan, and gluten-free, made directly in the Instant Pot. Also, its made with dried beans, no pre-soaking required. Of course, if you want to, you can pre-soak the beans to aid in digestibility and cut the cooking time down to about 15 minutes, but it isn’t necessary. And more often than not, I cook directly from dry because I rarely have enough foresight these days to plan for soaking beans overnight. Now if you don’t have an Instant Pot, and aren’t entirely sure you’re ready to invest in one (I get it, it took me a while too), you can absolutely make this over the stove. Just account for some extra cooking time (probably about 45 minutes to an hour total) and do soak your beans in advance. Unless you plan on having this simmer on the stove for hours on a Sunday afternoon. Which is also perfectly acceptable, and sounds quite wonderful, to be honest.

I love this recipe because aside from a couple of items, I usually have the majority of these ingredients in my fridge and pantry on daily basis. It’s also a great way to use up leftover veggies that might be lurking at the back of the fridge before they are too far gone. It has a great depth of flavor to it and it super hearty with its blend of beans and gluten-free pasta. A note of the pasta. I love to use gluten-free chickpea pasta in this recipe, as its a little sturdier than traditional pasta noodles and holds up well in the soup. I cook them separately, rinse them under cold water once they are al dente, and add them to the soup right before serving. Of course, you could use any noodle you’d like, or even throw a ½ cup of uncooked brown rice directly into the soup pot, if you’d prefer. I’ve done it both ways, and to be honest I can’t tell which I prefer. They are both delicious. Give it a try and let me know your preference in the comments 😉 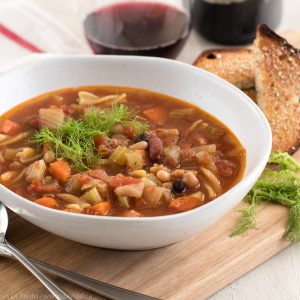 Save Print
Prep time
10 mins
Cook time
30 mins
Total time
40 mins
Hearty and comforting this revised take on an Italian classic comes together in a snap with the use on an Instant Pot, of course, it can be made stove top as well.
Author: David James Di Pardo
Recipe type: Main, Soup
Cuisine: Vegan, Gluten-Free, Sugar-Free
Serves: 4-6 servings
Ingredients
Instructions
Notes
*I like to use an 8 bean soup mix for this recipe for the variety of colors and textures, but any dried bean or bean mix would work. If you have a gluten sensitivity always ready the labels on soup and bean mixes. Some include barley which does contain gluten.
**For a thicker soup, closer in structure to a stew, replace the diced tomatoes with crushed/ground tomatoes.

To make this recipe without an Instant Pot, follow the same instructions, and cook the soup in a large pot or dutch oven over the stove. Be sure to soak the beans overnight, to reduce the cooking time. Simmer for 45-60 minutes depending on the types of beans used.
3.5.3226
Previous Post: « Sweet Potato Chili Boats
Next Post: Lo Mein with Hoisin Glazed Tofu »