A couple weeks back I was looking for birthday cake ideas for the hubby’s B-Day. Every year I have uncontrollable urge to surpass the previous year’s cake. Last Year I whipped up a an easy, but delicious chocolate cake, with peanut butter frosting and a layer of peanut butter caramel in the center. A recipe I’ll have to repeat again one of these days as my note taking was horrible and I know need to revalidate the whole recipe. I hate when that happens. I rush to bake the cake and think; I remember what I put in, I’ll write it down tomorrow. Suddenly, tomorrow turns to next month, leaving me plagued with doubt as I scribble down what little notes I can remember.

Anyways, back to this year’s cake. When in need of inspiration, I often turn to my Pinterest boards, where I found this beauty. Sweet & Salty Millionaires Layer Cake by Rosie over at Sweetapolita.com. I dare say it was love at first sight. All those flavours and textures, and oh so many layers. The original recipe isn’t vegan but that didn’t seem like too big of a deal. Naturally some components required a little more thought (like vegan swiss meringue buttercream, yes it can be done!), but with a print out by my side and a pen in hand, I was able to scribble down a vegan version.

This was by far one of the best cakes I have ever made. Rich and decadent, and let me tell, it feeds a crowd. 6 layers of dark chocolate cake, 5 layers of vanilla bean Swiss meringue buttercream, salted caramel, shortbread crumbs, the entire cake covered with chocolate ganache, and sprinkled with a combination of sugar and pink Himalayan salt. It took an entire day to prepare and assemble, but it was totally worth it. Several of the components can be made ahead, so if you’re going to make it, plan to make the cake layers, caramel, and ganache ahead of time. They can keep a couple days to a couple weeks in the fridge, which will make the assembly that much easier.

Unfortunately my pictures didn’t turn out nearly as pretty as Rosie’s as I was working with the left over cake and fleeting day light. Be sure to check out her site for her assembly instructions, pictures, and lots of drool worthy recipes. Definitely a crown pleaser, in your face last year’s cake! 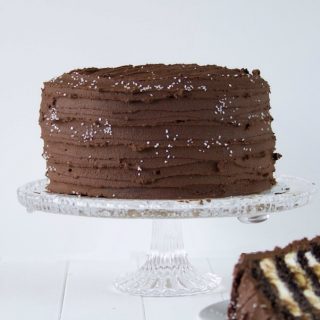