Hey there foodies. I’m here settling into the week after a loooong weekend, all the while prepping for some upcoming vacation time. Over the Easter weekend I reached out over Instagram asking who wanted a baked oatmeal recipe, which turned out to be a wise move, because I had so much fruit left over from Easter brunch.

If you’re following me on Instagram, which you totally should be, here is the link to the Chocolate Babka I teased you guys with. Sadly there were no leftovers of that, but… I was smart enough to freeze the second loaf for my upcoming vacay. So back to this Raspberry Almond Baked Oatmeal.

This recipe features President’s Choice Coconut Kefir. Not because its sponsored (it’s not), but simply because it’s a new discovery of mine. And I simply love it. Creamy and tangy, and loaded with probiotics to support gut health.

This recipe comes together really quickly and then hops into the oven for a bake. Its vegan, gluten-free, and refined sugar-free. Yet despite being healthy, it’s also warm, comforting, and somewhat more decadent than a bowl of oatmeal. Its fancy oatmeal… It’s also has a firmer, fluffier texture as opposed to the expected mush of oatmeal. Now, I’ll be honest, I like oatmeal and have never had any issues with the texture, but I know that isn’t the case for everyone.

This recipe does take longer to make versus regular oatmeal as it requires a bake, but that works for me. Because while the oatmeal is baking I can pour myself a coffee, grab a book, and settle into my morning. I’ve used raspberries, but you can switch things up and use whatever is in season. This would be fantastic during the summer months with fresh peaches. Apple and cinnamon would make a great fall version, as would sliced plums and ginger.

I like to serve it with extra kefir drizzled over top, but you could also give it a drizzle of maple syrup if you’re looking for a little more sweetness. 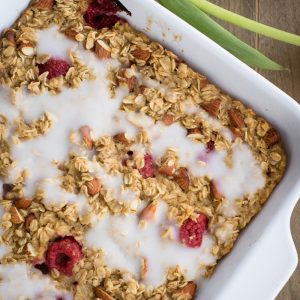